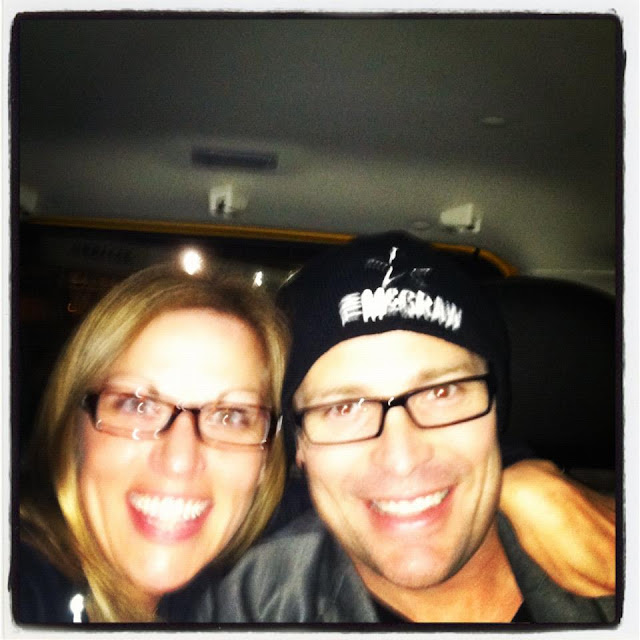 “In this moment my heart was full. My head was filled with happy. My excitement soared. Everything in the world was right. In this moment I was the best me I could be. And I have you to thank.”

New York. What an adventure. And it wasn’t so much the city, but the man. There is something so magical about heading to a place with the man you love and preparing for exploration. He and I are similar in many ways, however, his travel punch card is full and mine is quite empty in comparison. Our similarities are such that adventure is easy… Explore some place magical (or not), eat our way through the city (from simple food carts to Iron chefs) and take it all in… Additionally, I have a child-like wonder and excitement when it comes to experiencing life and adventure. He is mature and level headed. And so this adventure was one to remember.

I have not been back to New York since I was a child. As a kid we lived on Long Island and enjoyed visiting the city for Sesame Street shows and the circus. And the desire to return and truly experience the city has been one threaded through years of travel and growing up. It’s one of those magical and notorious cities that grips you. You’ve either heard about it, dreamt about it, experienced it for yourself or lived vicariously through others. One thing is true…. New York is somewhere to be experienced as fully as possible, with a lust for exploration that leaves no corner unturned and no sight unseen. 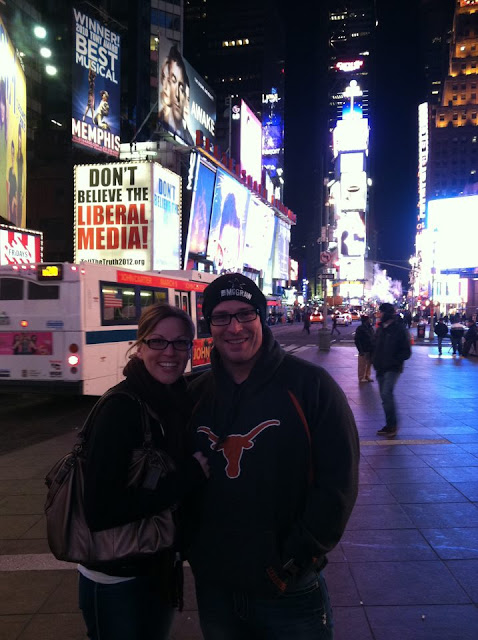 We left on the last flight out of Arizona, a movie was watched in flight and the travels passed by quickly. My excitement truly started to peek when the lights of the city were in view from the plane’s window. I was looking for any obvious landmark, there were none. But, we were in New York, plane on the ground in the 11 o’clock hour. It was still early by our internal clocks and my thrill was electrifying. It doesn’t take much for me to truly feel excitement and joy… And this adventure started to overwhelm my senses. I was overjoyed. 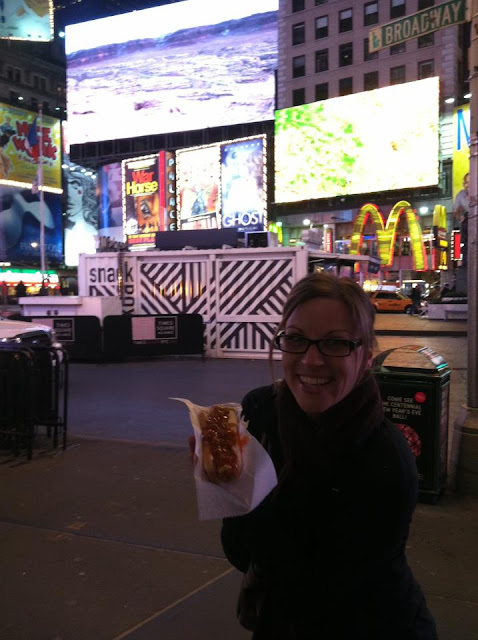 The ride, in a New York City cab, was thrilling, fast paced and executed with intention. Those cabbies are no BS. They move and maneuver the streets with grace and intensity. We peered out the windows, looking up at the high rises and those landmarks I sought. The city was still a-buzz and lights were dotting our travels like the magic of a Christmas Tree’s twinkle. We arrived at our hotel, Park Central, and stepped into the city air… It was a mixture of food and toilet and grease and fresh. The most distinctly different smell I have ever encountered and it too added to the adventure. After check-in we agreed that a trip to Time Square, not 10 blocks away, was in order to get a snack and “see” first hand the city. A DIRTY WATER DOG was enjoyed. After years of joking about New York cart hot dogs, we were FINALLY eating one together… AND IT WAS DELICIOUS. 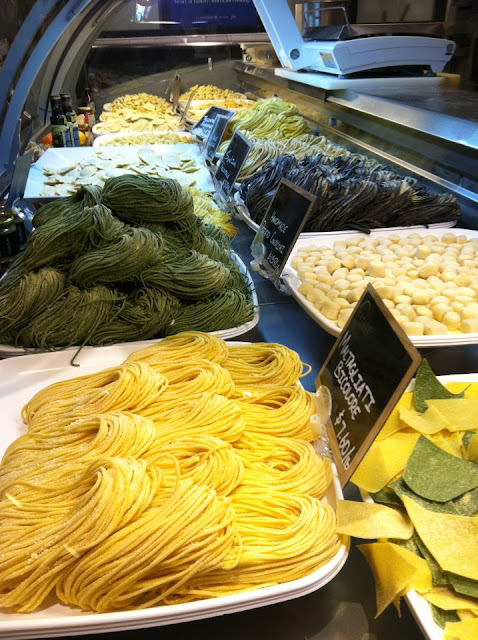 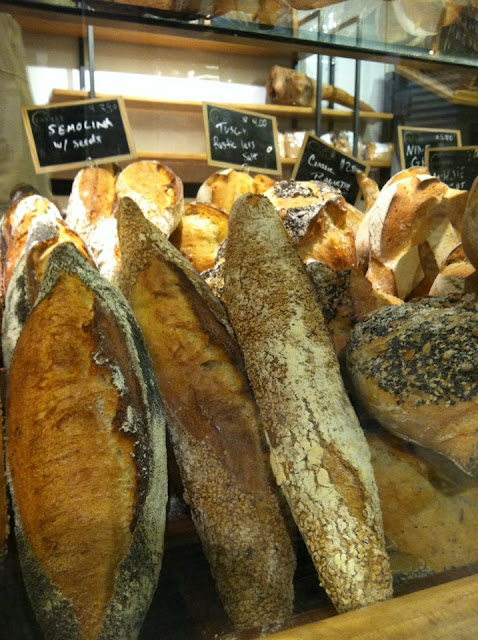 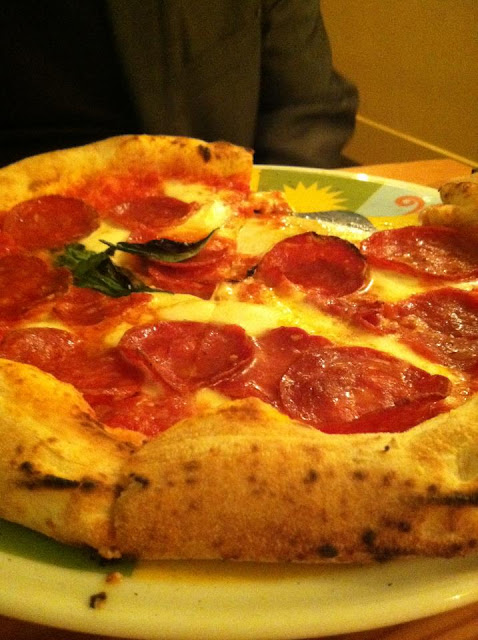 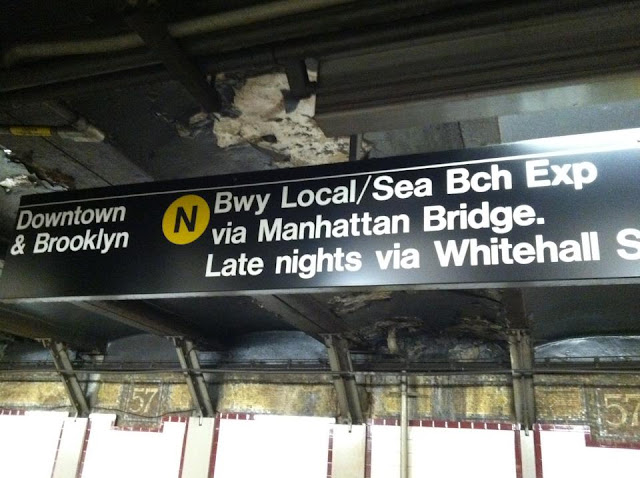 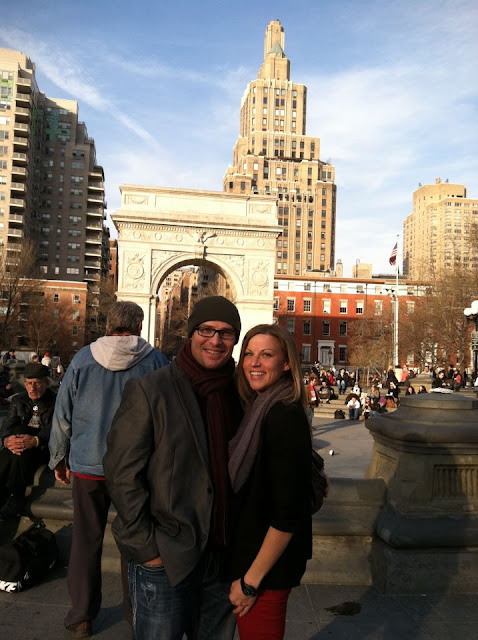 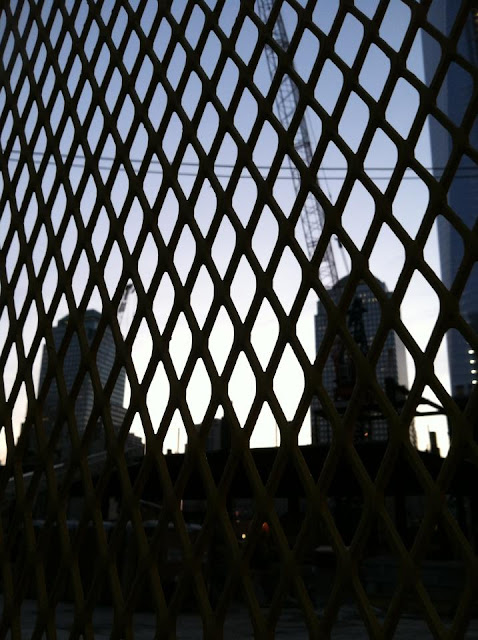 Day 1: it is simple… We had fun. Starting the day in a city diner, enjoying eggs and sausage, coffee and muffins. After getting ready and some work we explored, made our way to Macy’s to see “the” Macy’s; incredible. I imagined Santa there during the holidays and all the Miracle on 34th Street scenes that must have been shot there. It was wild, to think, just how long that building had stood there, just how many feet had walked those halls and with the oldest escalator in history within its store… The history and stories those walls held, incredible. We navigated the streets walking to Eataly, a Mario Batali find. An italian market filled with little restaurants, very much like an indoor italian piazza, stores and food sprinkled about. We enjoyed fresh pizza and pasta. One Iron Chef down, two to go. A trip back to the hotel, for me a rest, for him work, afforded a nap, a little new break and a moment to freshen up. Then after some time, we ventured down into the subway system and off to SoHo we went. Shops, shops and more shops. Though we weren’t in the market for any major purchases, it was awesome to explore the shops door to door. We managed to walk our way from SoHo to Tribeca and then down to Wall Street and Ground Zero. Though I had no recolection of what the city looked like with two towers standing tall, I easily sunk back into the patriotic feelings of 9/11 and the Americana that charged the country at that time. Dinner was incredible… Iron Chef #2 in the books. Marc Forgione has an incredibly quaint restaurant in Tribeca. Brick walls, candles glowing, floor to ceiling windows, distressed wood tables and a team of highly energetic and personable individuals that made exploring the menu grand. We chose to eat from the tasting menu, selected our drinks and the dining adventure began. Course after course of incredible food was laid in front of us. Small palate cleansing bites and magical sauces, meat tender and juicy. The four of us were tempted to lick our plates time and time again. There are bites that still stand out in my memory; the Chili Lobster (creamy, delicious, succulent, buttery, all with bread to sop up the spicy sauce), Hiramasa Tartare (the most intensely flavorful bite I’ve ever taken, paired with fresh and crisp flavors all for a light and exciting course) & Banana Pecan Pie Bread Puddin’ (the most delicious, sweet and smooth dessert, distinct flavors of banana paired with the caramelized crunch of the top of a pecan pie)… My senses were in heaven. The company and the conversation made the evening pure perfection. I did not want the night to end. This night was the first time in a long while I felt like a grown up, talked like a grown up and laughed throughout the evening too. 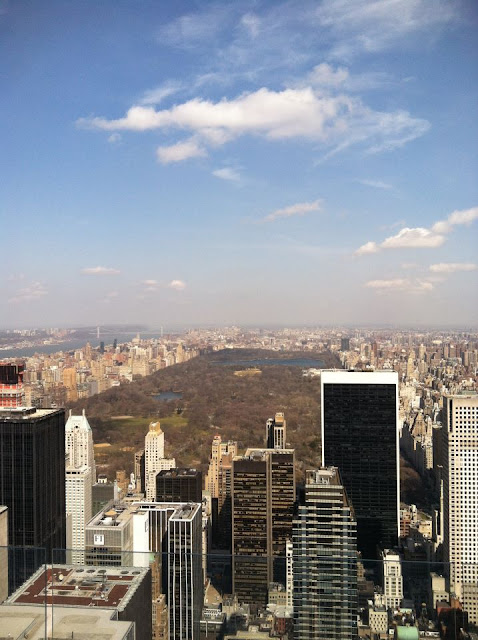 Day 2 was a day of independent explorations paired with meals with my man. It was a crisp and cool morning that lead into a comfortably warm day. Breakfast was at another diner. I was in awe of the unique and enjoyable accents and cultures that are experienced in New York City diners. New York is one place where all congregate to be one. A grouping of many cultures and clashes of many styles, individuals from all over pursuing dreams of something. I took New York City by storm this day… walking through Time Square, up and down streets, by the Empire State Building, to Rockefeller Plaza. I stood outside The Today Show while the 4th hour was recording. Kathy Lee and Hoda were in studio. There was an air of magic being within feet of “my” morning show. I ventured to the Top of the Rock and peered over the city from every angle. From near and far, park to water fronts, famous building to famous building. Lunch at Bar Americain was next… Heading to Iron Chef #3. By this time I had learned the streets and loved the feeling of knowledge I had gained. Lunch was incredible, though Bobby Flay was not in the building, sitting in his restaurant was lovely and definitely on the list of “things I must do”. We walked to Broadway and the theater for Once and purchased our tickets for that evening. I was off to independently explore, he was off to work. 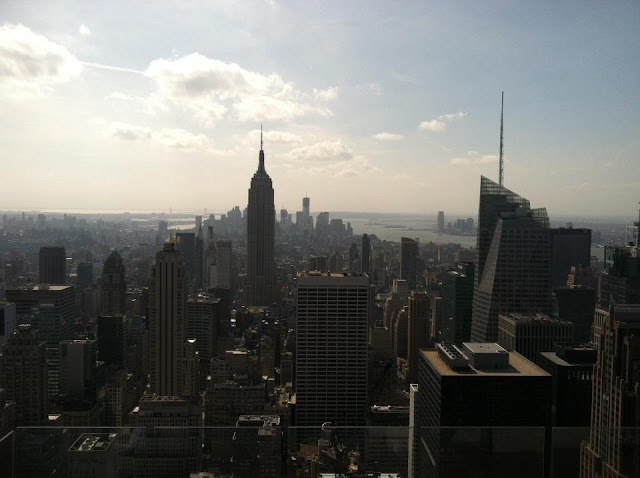 I road the subway, exited at Wall Street and walked to Lady Liberty. It was just my luck that I had made it to the ferry for the last ride of the day. I entered the boat and made my way to the top level. The ride was crisp and exhilarating. As we neared Lady Liberty I was thrilled, the beauty of her size and the green structure she was; it was incredible. Her shoes looked like tennis shoes, funny as I never thought twice about what her shoes might be, but was surprised that they were not heels. Her torch was incredible, held high with pride. The seagulls flew alongside the boat and the city was now a backdrop versus a huge community I was wandering. The boat then stopped at Ellis Island and the brick structure made me think. To know this is where it all started… And as we rode back to the city, I reflected, how lucky I am to live the life I live. Feet on Manhattan again, I started my walk back to 57th and 7th. I hopped on the subway yet again and jumped tracks until I was at Grand Central Station. Awe inducing beauty, greens and golds, hustle and bustle, food and tracks… What an incredible site to see. Again, the excitement of learning this city struck, I walked out a random door onto the bustling streets, without viewing a map, my journey lead me to our hotel. After freshening up we were off to our final dinner and our Broadway play. 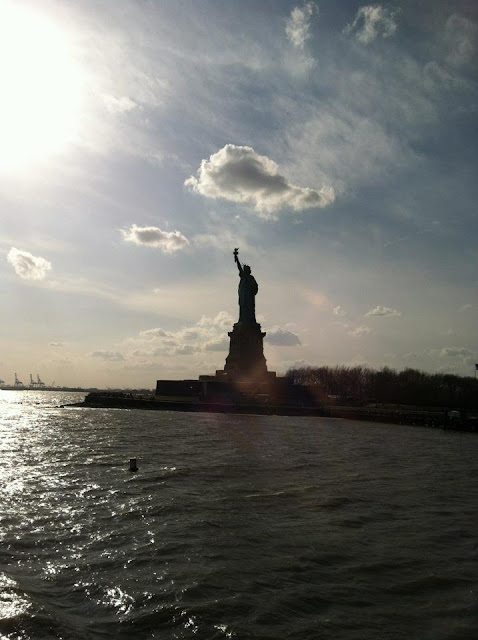 Sushi for dinner, a drink, a delicious dessert and Once… May I say, Once was the best play ever. It was INCREDIBLE. The musicality of the actors. The story line. The quick wit. The comedic timing. It was magical. During intermission we were able to step on stage. The wear and tear of the stage told a story, night after night of shows and the view from the stars perspective was a once in a lifetime experience. There was an electric charge as the play ended and all the Broadway theaters started spilling onto the NY City streets. The walk back to our hotel was filled with chatter, comparison, songs sung and laughter. We enjoyed a Starbucks stop and a cannoli search as our nights curtain call approached. The night was crisp, chilly and as we tucked in to sleep with the city buzzing around us, my heart was full. 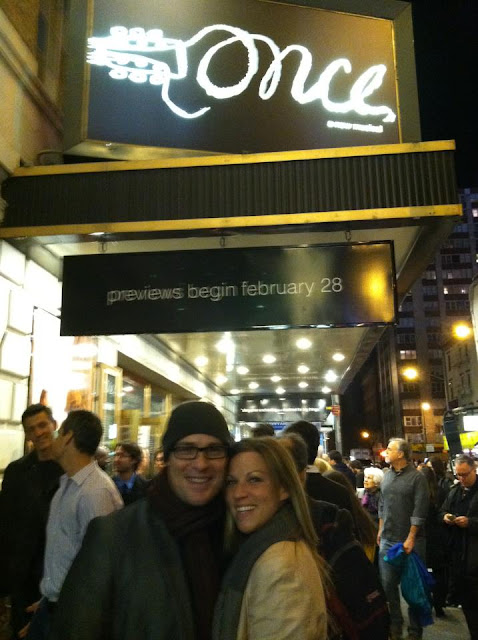 I had the time of my life. Taking the city by storm. Being an explorer of the world with my man.
Life is incredible and I am so very blessed!